Hack.lu 2015 CTF was organised by fluxfingers during October 20-22. It's one of the coolest CTFs around, the only drawback is that it runs during week days (hey guys patch this for the next years). My team TheGoonies ranked #59th, which is not bad considering we only played part-time.

The task Dr. Bob was the one I found most interesting as it included disk forensics, memory forensics and basic crypto tasks.


There are elections at the moment for the representative of the students and the winner will be announced tomorrow by the head of elections Dr. Bob. The local schoolyard gang is gambling on the winner and you could really use that extra cash. Luckily, you are able to hack into the mainframe of the school and get a copy of the virtual machine that is used by Dr. Bob to store the results. The desired information is in the file /home/bob/flag.txt, easy as that.

The file provided is a VirtualBox image in a saved state. According to the challenge instructions, we have to retrieve the flag from the user home folder. The VM starts on a login terminal of what seems to be a Linux distro. 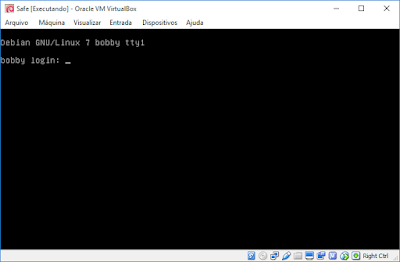 The easiest route here is to convert the VDI image to raw, mount and extract the key from the home folder. VirtualBox has a builtin tool to convert VDI to raw and it's as simple as:

Let's identify the raw image and mount it externally: 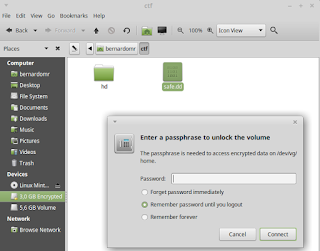 Oh noes, the disk is encrypted... I couldn't find any useful data on the root device (/dev/vg/root). I tried to crack some local password hashes but I didn't get anything and logs/history files didn't reveal any secrets. Time to unleash some CSI skills and perform live memory forensics.

Unlike VMWare virtual machines, VirtualBox does not offer an easy-to-use memory dump (as far as I know). What do we do now? It's time to perform VM introspection with Rekall.

Rekall is the first memory framework to support transparent introspection of VMs with any host-guest OS combination and is independent of the virtualization software layer.

The Linux Guide from rekall repository is pretty straightforward. I downloaded a Debian 7.9 i386 ISO, installed it on a clean system, installed the Kernel headers from the target VM and built the corresponding profiles. I mirrored them here:

Now that we have the proper profile, we can run VirtualBox, start the VM and perform live forensics on the guest machine.

The vmscan plugin scans the physical memory attempting to find hypervisors and group them together logically as virtual machines.

It's possible to run plugins on any VM by using the --ept (Extended Page Tables) parameter on the command line. To run a rekall plugin on a VM that vmscan found, invoke rekall as you normally would, but add --ept EPT_VALUE as a parameter. 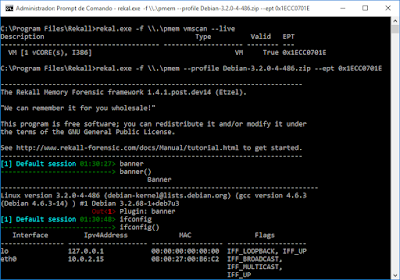 I tried to use the base Plugins that supports Linux analysis, but none of them revealed the secrets necessary to decrypt the disk. 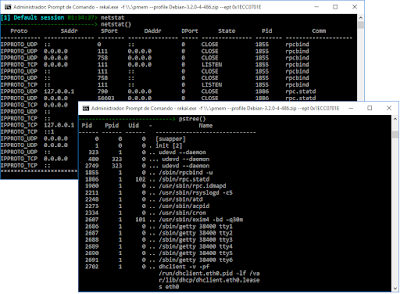 After some time I decided to take a different approach and dump the full memory from the Guest VM and carve for some secrets.

You can use tools like bulk_extractor and findaes to extract AES keys from memory dumps. These programs work by carving the images and eliminating anything which is not a valid AES key schedule.

The tools found an AES-128 key, and I now needed to recreate this behavior on a lab to make sure that it was the encryption master-key. I set up an encrypted volume on a Debian installation and dumped the master keys using cryptsetup: 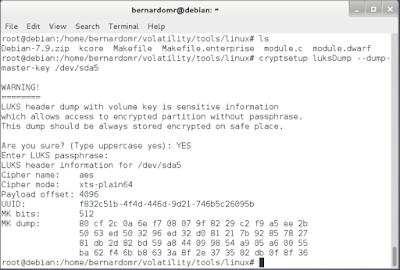 After that, I dumped the operating system memory and used bulk_extractor to search for AES Keys:

The AES256 key matches with the MK dump, what brings us to the final step.

Now that we have the AES Key, all we need to do is follow this guide - Cryptsetup and the master key - and decrypt '/dev/vg/home'. There's no command-line to decrypt the disk using the master-key, everything is kind of hackish (you need to corrupt the headers and create a new one using the key). 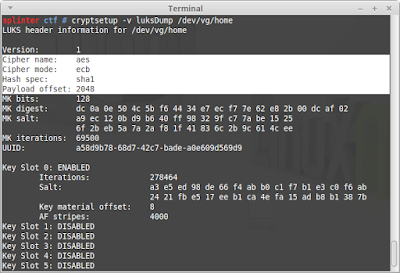 We now proceed to write a new LUKS header on the device using the extracted MK, assigning a new passphrase: 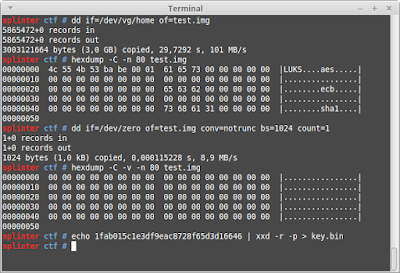 They tried to hide the flag from "/bin/cat" using the carriage return char (0x0D), but hexdump and Pluma had no problems displaying it: 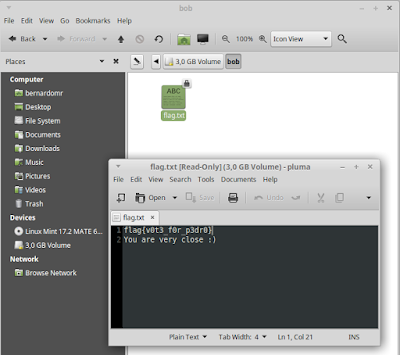 
Update 1: @rbaranyi and David Berard pointed out that replacing '/etc/shadow', login with the known password and then use 'strings /dev/lvm' would be easier. That's true, but that wouldn't involve any kind of memory inception.

Update 4: Some teams used the dm_dump volatility plugin: it identifies disks on the target system which were mounted using the device-mapper framework. The output of this plugin gives you the arguments to pass to the dmsetup command to remount the original unencrypted file system on a different machine.

Posted by Bernardo Rodrigues at 6:02 AM 4 comments:

Many respected researcher had found and published something about this class of bugs and this blog is no different: this post describes a completely useless super serious vulnerability affecting Mac OS X 10.11 and earlier.

Mac OS X 10.11 (and probably older versions) are vulnerable to a partial lock screen bypass. This is not a *complete* lock screen bypass as you won't be able to freely interact with the Desktop (as far as I know). Here are the steps to reproduce this bug: 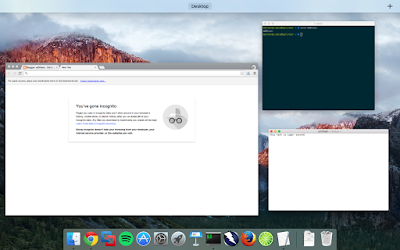 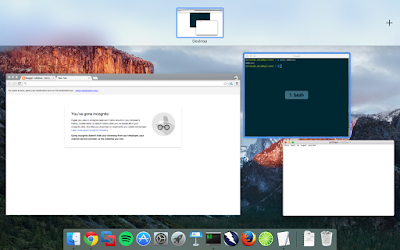 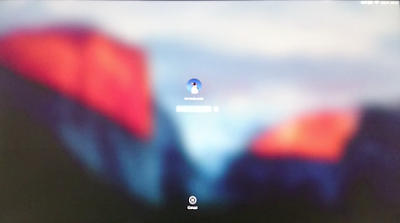 That's it, now the lock screen has an "extra layer" with the miniaturised desktop windows. If you move the mouse cursor over the correct application position and hit the Space Key, a bigger window will be displayed. 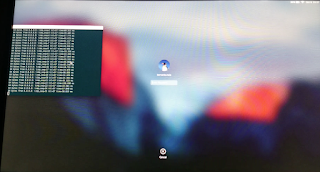 You can watch Youtube videos and interact with media players (Quicktime, Spotify etc) using the media control keys. You can't interact directly with the app: if you left-click on the windows or hit Enter, the lock screen takes over that invisible layer.


If Youtube is blocking the video in your country, watch it here:

If you are a serious tech journalist reporting about this bug feature, don't forget to say that this is specially useful to play Youtube and Spotify playlists during parties at a friend's house. You don't want to leave you Mac logged in and unattended, so you simply preload the playlist and lock the screen using this cool technique.

This is yet another useless totally serious bug affecting the new Mac OS X El Capitain. You can hide an application window from the user by moving them to another display and alternating the screen mirroring options. Here are the steps to reproduce this bug: 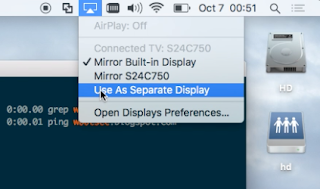 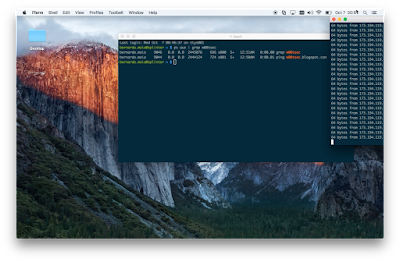 3 - Hit the Exposé Key (F3), move the mouse cursor over the window you want to hide and hit the Space Key.

I personally use this to hide all the Mac applications from coworkers who leave their computers unlocked and unattended.

Posted by Bernardo Rodrigues at 11:18 AM 2 comments: